This search form uses an instant search feature. As you type, search results will appear automatically below the search field. When you've entered you desired search terms use tab to navigate through the available results and hit enter to open the selected page or document.
EDIT LEFT

The Board of the New Lisbon School District does not discriminate on the basis of sex in its education program or activity and is required by Title IX and implementing regulations not to discriminate in such a manner. The requirement not to discriminate in its education program or activity extends to admission and employment. Any inquiries about the application of Title IX and its implementing regulations to the District may be referred to the Title IX Coordinator(s), the Assistant Secretary for the U.S. Department of Education’s Office for Civil Rights, or both.

The Board has adopted a grievance process that provides for the prompt and equitable resolution of student and employee complaints alleging any action that is prohibited by Title IX and/or its implementing regulations. The grievance process is included in Policy 2260 – Nondiscrimination on the Basis of Sex in Education Programs or Activities, which is available at: NEOLA Policies. The grievance process specifically addresses how to report or file a complaint of sex discrimination, how to report or file a formal complaint of Sexual Harassment, and how the District will respond. 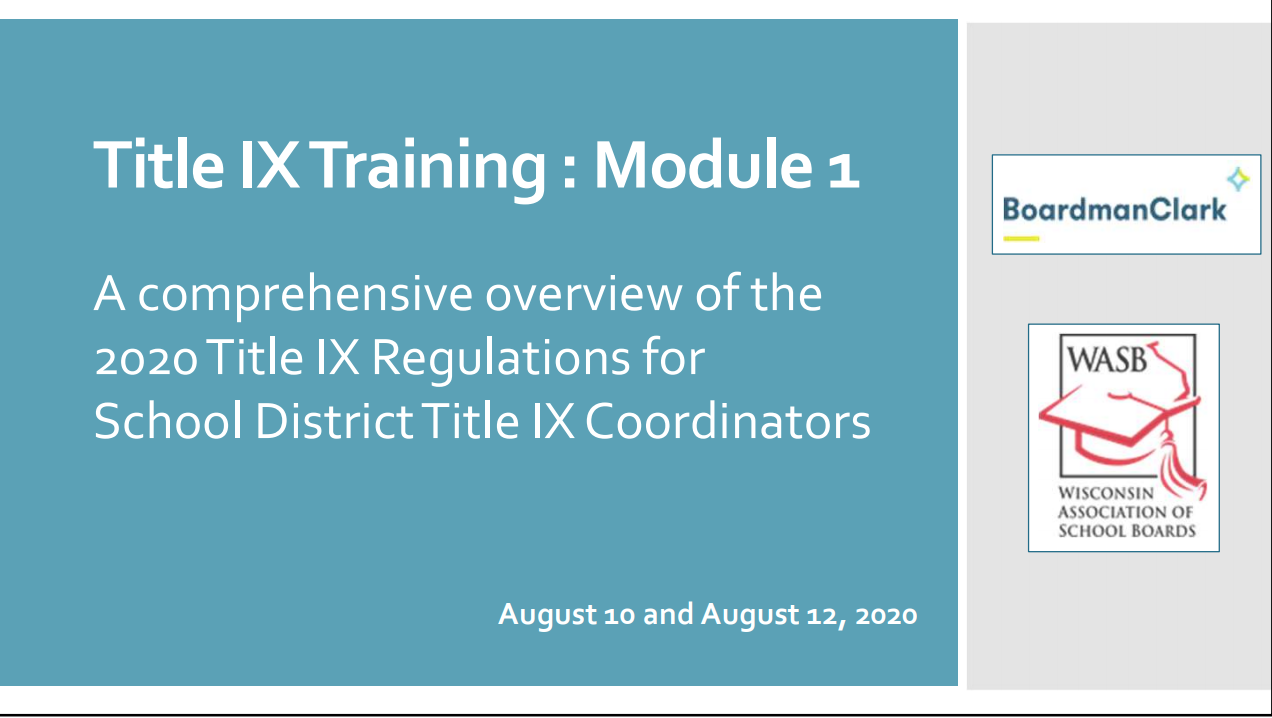 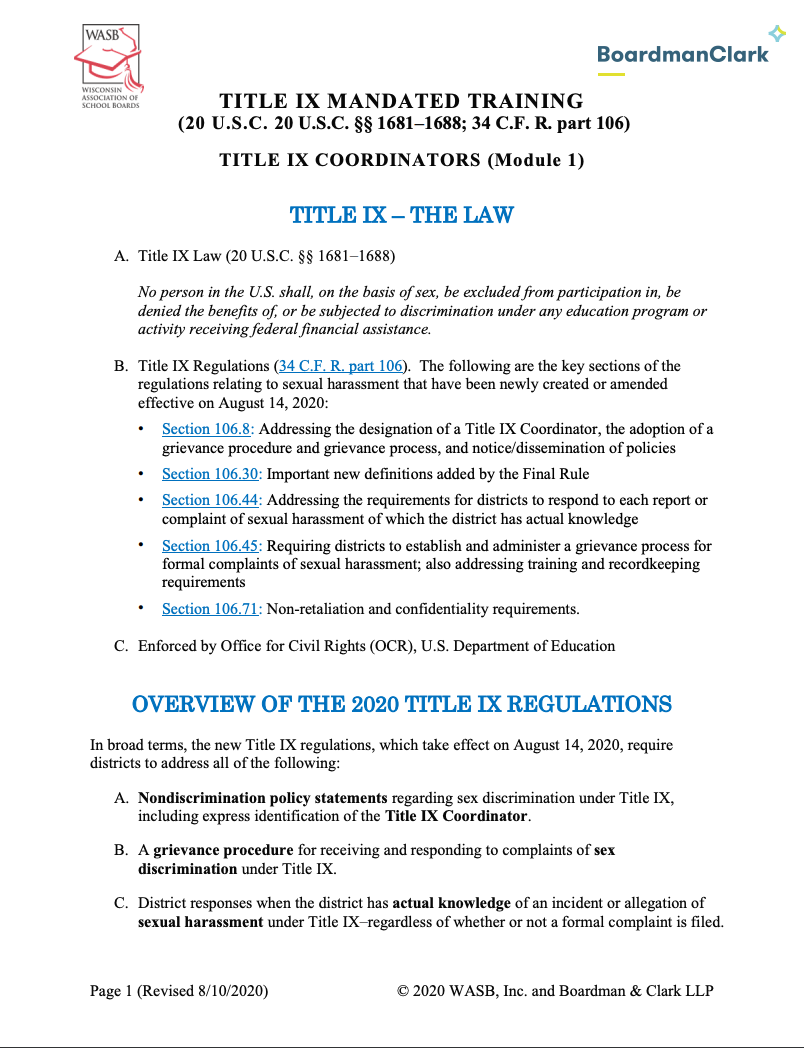 As mandated by the current provisions of Title IX of the Education Amendments of 1972 and under the regulations set forth in Chapter 106 of Title 34 of the Code of Federal Regulations (“the federal Title IX regulations”), the District does not unlawfully discriminate on the basis of sex in any education program or activity that the District operates. Title IX’s requirement not to discriminate in any education program or activity extends to cover, but is not limited to, District students, certain admissions processes, and District employment. Inquiries regarding how Title IX and the federal Title IX regulations apply to the District may be referred to a District Title IX Coordinator (as designated below), to the Assistant Secretary for Civil Rights at the U.S. Department of Education, or to both.

The District’s commitment to nondiscrimination under Title IX and under other state and federal laws is further defined in the following policies of the School Board: Policy #2260

The District employees who hold each of the positions identified below serve as Title IX Coordinators for the District:

The names, titles, and contact information of these individuals will be published annually in the staff and student handbooks and on the School District's website.

A CO will be available during regular school/work hours to discuss concerns related to student discrimination in educational opportunities under this policy.

Any person (including a person who is not claiming to have been personally harmed/victimized by the alleged discrimination) may report a concern or allegation regarding prohibited sex discrimination (including sexual harassment) to the District. Such reports may be submitted as follows:

As required by the federal Title IX regulations, the District has established a formal grievance process for investigating and resolving “formal complaints” of “sexual harassment,” as those terms are defined in the regulations.

Complainants are expected to file formal complaints of sexual harassment with a District Title IX Coordinator by submitting a document or electronic submission in person, by U.S. mail, or by electronic mail, using the contact information specified above.

Additional requirements for formal complaints of Title IX sexual harassment, including a description of the required content for a formal complaint, are set forth in Policy #2260.

The CO shall investigate any complaints brought under this policy. Throughout the course of the process, as described herein, the CO should keep the parties informed of the status of the investigation and the decision-making process.

All complaints must include the following information to the extent it is available: a description of the alleged violation, the identity of the individual(s) believed to have engaged in or to be actively engaging in, conduct in violation of this policy if any; a detailed description of the facts upon which the complaint is based; and a list of potential witnesses.

Upon receiving a complaint, the CO will consider whether any action should be taken during the investigatory phase to protect the Complainant from further loss of educational opportunity, including but not limited to a change of class schedule for the Complainant, tentative enrollment in a program, or other appropriate action. The Complainant should be notified of any proposed action prior to such action being taken.

As soon as appropriate in the investigation process, the CO will inform any individual named by the Complainant in connection with an alleged violation of this policy, that a complaint has been received. The person(s) must also be provided an opportunity to respond to the complaint.

The investigation will include:

At the conclusion of the investigation, the CO shall prepare and deliver a written report to the District Administrator which summarizes the evidence gathered during the investigation and provides recommendations based on the evidence and the definitions in this Policy, as well as in State and Federal law as to whether the Complainant has been denied access to educational opportunities on the basis of one (1) of the protected classifications, based on a preponderance of evidence standard. The CO’s recommendations must be based upon the totality of the circumstances, including the ages and maturity levels of those involved.

The CO may consult with the Board Attorney before finalizing the report to the District Administrator.

Any person, including the Respondent in a complaint, who is subject to disciplinary action up to and including termination as a result of a complaint may choose to file a Grievance utilizing the District's grievance procedure as outlined in Policy 3430 or Policy 4430.

If the Complainant feels that the decision does not adequately address the complaint s/he may appeal the decision to the State Superintendent of Public Instruction by submitting a written request to the Wisconsin Department of Public Instruction, Pupil Nondiscrimination Program, or by contacting the DPI Pupil Nondiscrimination Program at (608) 267-9157.

The Board reserves the right to investigate and resolve a complaint or report of regardless of whether the member of the School District community or third party chooses to pursue the complaint. The Board also reserves the right to have the complaint investigation conducted by an external person in accordance with this policy or in such other manner as deemed appropriate by the Board.

The District has established grievance procedures through which the District structures its response to reports that allege unlawful discrimination on the basis of sex in any education program or activity of the District. Those procedures are set forth in Policy #2260. The purpose of such procedures is to provide for the prompt and equitable resolution of any report or complaint of alleged sex discrimination, excluding formal complaints of sexual harassment under Title IX (which are subject to a different process).

If the evidence suggests that any conduct at issue violates any other policies of the Board, is a crime or requires mandatory reporting under the Children's Code (Sec. 48.981, Wis. Stat.) (Policy 8462), or threats of violence (Policy 8462.01), the CO or District Administrator shall take such additional actions as necessary and appropriate under the circumstances, which may include a report to the appropriate social service and/or law enforcement agency charged with responsibility for handling such investigations.

Retention of Investigatory Records and Materials

All individuals charged with conducting investigations under this policy shall retain all information, documents, electronically stored information ("ESI"), and electronic media (as defined in Policy 8315) created and received as part of an investigation, including, but not limited to:

The information, documents, ESI, and electronic media (as defined in Policy 8315) retained may include public records and records exempt from disclosure under Federal and/or State law (e.g., student records).

The information, documents, ESI, and electronic media (as defined in Policy 8315) created or received as part of an investigation shall be retained in accordance with Policy 8310, Policy 8315, Policy 8320, and Policy 8330 for not less than three (3) years, but longer if required by the District's records retention schedule.